The paper, titled State of open banking payments in Europe in 2021, draws on the testing of more than 2,500 PSD2 APIs from 31 European countries.

The analysis found that, as mandated by law, the UK’s CMA9, or the country’s nine largest banks, are mostly the ones in the region that share data about more types of accounts.

In particular, banks in France, Denmark and the Netherlands were found to be amongst those ahead of the curve, providing access to information about credit card transaction information, mortgage, savings and investment accounts, for example.

Open finance as part of the EU’s Digital Finance Strategy

Open finance is the next step in the open banking journey that involves enabling third-party providers to access customers’ data across a broader range of financial sectors and products, including savings and investments.

Legislations like Australia’s Consumer Data Right are setting the foundation for the sharing of data not only across the banking industry but other sectors as well including insurance, investment, energy and telecommunications.

In Europe, an open finance framework is currently in the works with hopes for greater data-driven innovation in the financial sector. Building on the progress made with the landmark revision of the Payment Services Directive (PSD2), the new legislation will seek to further enhance data sharing and openness across and within sectors. A legislative proposal for the framework is expected by mid-2022.

The open finance framework is part of the European Commission (EC)’s broader Digital Finance Strategy, which sets out key priorities for the development of digital finance.

These priorities include removing fragmentation in the Digital Single Market by reducing regulatory coherence and facilitating cross-border activities, adapting the European Union (EU) regulatory framework to encourage digital innovation notably in the areas of artificial intelligence (AI) and crypto-assets/blockchain technology, promoting data-driven innovation in the broader finance sector, and addressing the challenges and risks associated with digital transformation.

Open banking has made considerable progress in Europe over the past years. The Salt Edge report notes that API availability amongst banks in Europe has greatly improved since 2020 with the highest performances this year recorded by institutions in the UK,  Czech Republic, Portugal, Austria, the Netherlands and Belgium.

The API availability rate is measured by the percentage of API requests sent by Salt Edge that were accepted by banks’ APIs and successfully replied to. 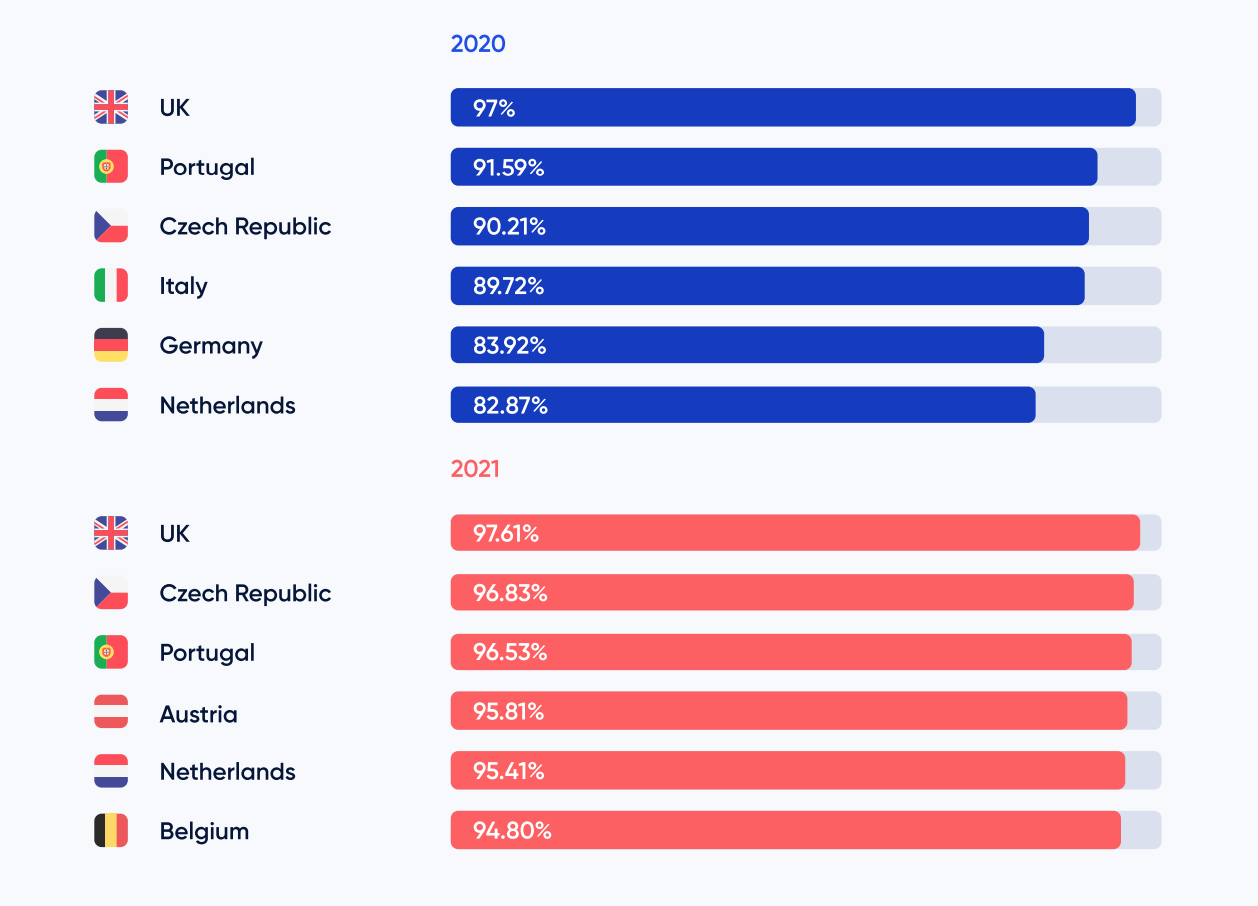 These banks include Commerzbank and N26 from Germany, La Banque Postale from France, Raiffeisen Bank from Austria, Banca Popolare di Sondrio from Italy and OTP Bank from Hungary.

In Switzerland, the deployment of open banking remains at a much earlier stage than the regulatory-driven EU, despite consumers showing strong interest in the use cases and opportunity the trend brings.

A Mastercard survey, which polled more than 1,000 consumers from Switzerland earlier this year, found that out of the respondents who had not heard of open banking before, 14% showed interest after being provided a generic definition, a level that increased significantly (52%) when consumers were given explanations of real use cases of open banking.