Greenfield business builds continue to be a top innovation strategy for the banking and wealth management industry, according to a new study by the Economist Intelligence Unit (EIU) and Temenos.

In a report titled Forging new frontiers: Advanced technology will revolutionise banking, the EIU shares findings from a global survey of 305 banking executives it conducted in early 2020 on behalf of Temenos.

According to the study, building a greenfield digital bank was found to be the most prevalent innovation strategy amongst banks with 35% of global banking executives stating their financial institutions were doing so. The trend was shared by the wealth management industry where 52% said they believed this to be the best way to compete most cost effectively in this rapidly evolving landscape.

Building a greenfield fintech company ranked fourth, with about 17% of global banking executives pursuing the strategy.

The greenfield approach revolves around building entirely new entity or service in a totally new environment without any constraints based on legal systems.

The concept has been adopted by the likes of HSBC with Serai, a standalone business focused on digitizing the import/export value chain, Goldman Sachs with Marcus, which offers personal loans and savings accounts, and National Australia Bank with QuickBiz, an automated unsecured lending platform.

In digital banking, the greenfield approach has led to projects and outfits like Openbank, the digital bank of Santander in Spain, Bank Leumi’s Pepper in Israel, and Equitable Bank’s EQ Bank in Canada.

After greenfield digital banking, banking executives cited open bank hub initiatives (29%) and investing in fintech startups (26%) as the second and third most popular innovation strategies. Participating in sandboxes to collaborate with fintechs and other technology providers to test new propositions (25%) was also found to be a popular strategy.

These findings suggest that banks are increasingly turning to digital strategies that would allow them to move away from their current operating models and promote greater agility.

This trend is further shown by the survey’s results where banking executives named improving product agility and the ability to launch new products (26%) as the third most important strategy priority.

The study, which focused on themes relating to the digitalization of banking, found that the COVID-19 pandemic has put sense of urgency to banks’ digital push.

45% of banking respondents said their strategic response to COVID-19 was to build a “true digital ecosystem” and integrate their self-built digital services and third-party offerings. Along the same lines, an overwhelming majority of respondents (83%) believe that platformization of banking will steer the market.

AI to play a key role

Artificial intelligence (AI) will play a critical role in accelerating this digital shift with over three-quarters (77%) of respondents agreeing that unlocking value from AI will be a key differentiator between winning and losing banks.

Amongst AI’s most valuable applications, banking executives cited improving user experience through greater personalization (28%) as the most impactful use case. 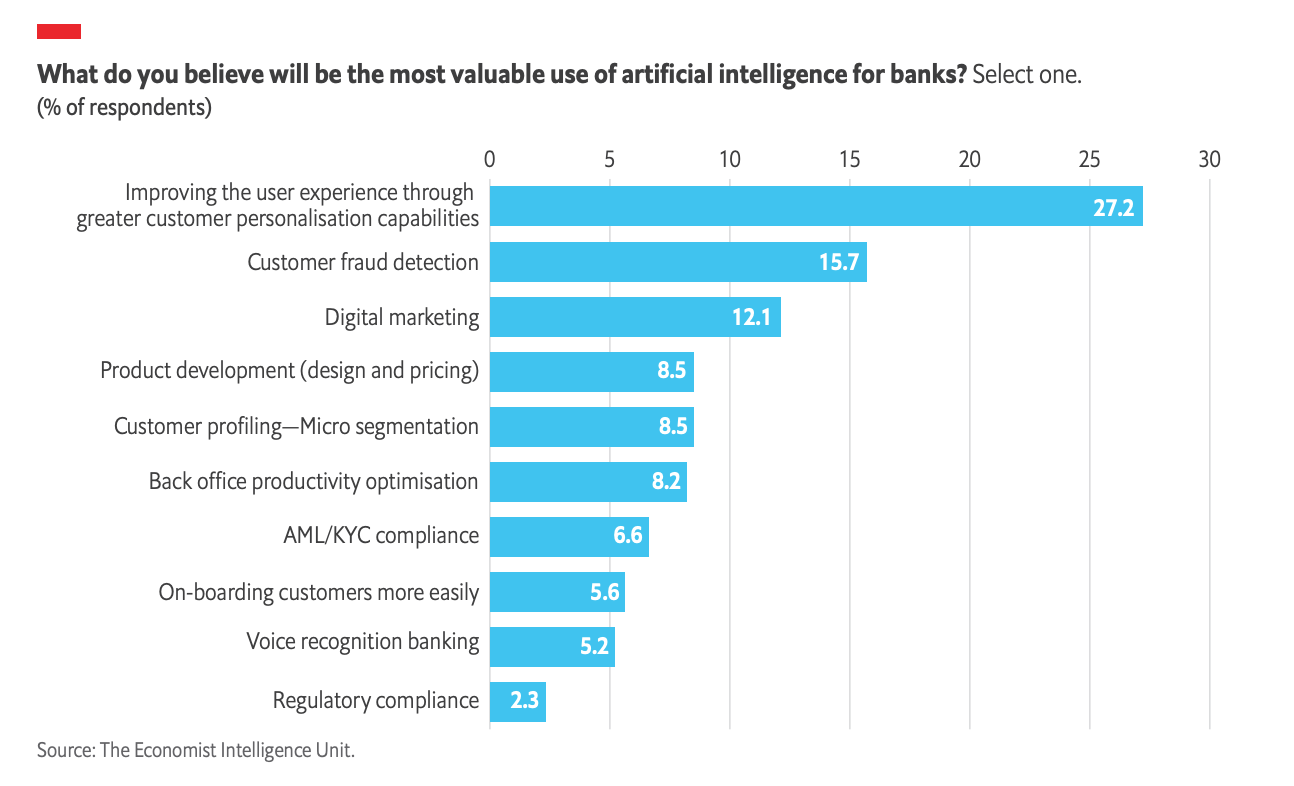 What do you believe will be the most valuable use of artificial intelligence for banks? Forging new frontiers: Advanced technologies will revolutionise banking, June 2020, Source: The Economist Intelligence Unit

32.5% of banking respondents said they were developing AI platforms such as digital advisors and voice assisted engagement channels, and 15.1% said they were working on improving back office productivity through AI platforms, showcasing that banks around the world are betting big on the technology. 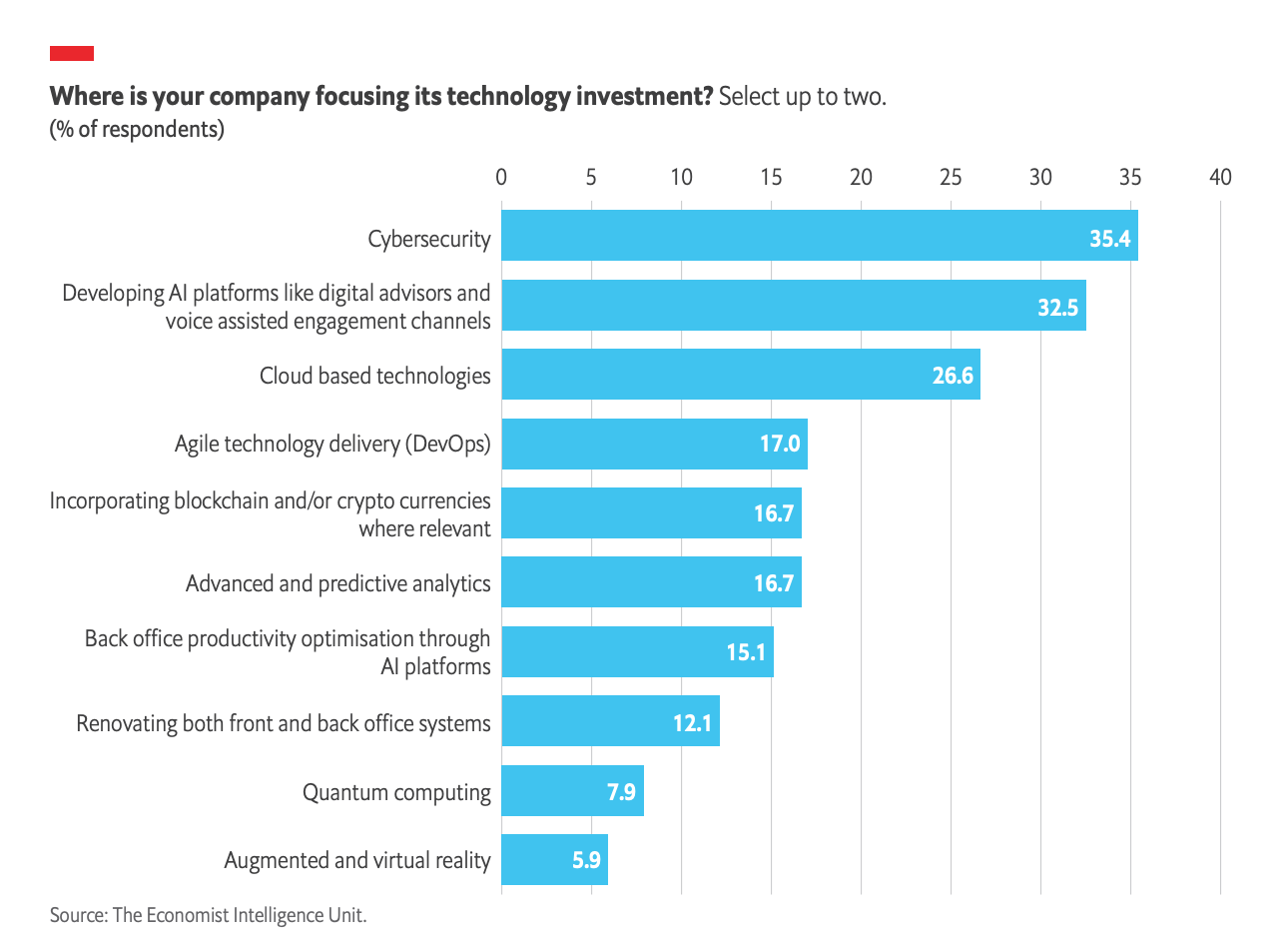 According to Deloitte’s annual State of AI in the Enterprise report, 2020 will be the year that AI enters the enterprise mainstream adoption.

The consulting firm, which surveyed more than 2,700 IT and line-of-business executives, found that all respondents are currently using some form of AI in their companies.

The study also found 53% of these adopters have spent more than US$20 million over the past year on AI-related technology and talent, and 71% are planning to increase spending in the next fiscal year.