In 2021, the Swiss fintech industry continued to mature, with established ventures attracting considerable funding to fuel growth and pursue their global ambitions.

In the digital asset and blockchain space, the momentum pursued, building on the surge in crypto and digital asset trading, and the entry into force of the landmark distributed ledger technology (DLT) act, a legislation that introduces a new licensing regime for digital asset trading platforms and allows for ledger-based securities.

The year also saw the Swiss insurtech sector picking up steam to eventually become one of Europe’s largest hubs for insurance innovation.

Green fintech was another hot segment this year with initiatives being spearheaded by the government to foster collaboration and encourage innovation in sustainable finance.

In 2021, fintech continued to attract investors’ interest. Out of the CHF 1.4 billion raised by Swiss tech startups in Q2 2021, CHF 677 million, or nearly half of that sum, went towards fintech companies, data from Startup.ch show.

Companies including Vestr, a capital markets startup, Metaco, a provider of security software and infrastructure to the digital asset ecosystem, SEBA Bank, a digital assets firm with a Swiss banking license, Sygnum, a digital asset bank, NetGuardians, a fraud prevention startup, and SIX, Switzerland’s bourse operator, have all set their sights on Asia, establishing regional headquarters and ramping up investment in the region.

Others, like Futurae Technologies, an authentication and transaction confirmation provider, Amnis Treasury Services, a cross-border payment startup, and Inyova, an impact investing startup formerly known as Yova, have instead opted to expand nearby in other European countries.

Just last month, Amnis Treasury Services was granted a license by the Financial Market Authority Liechtenstein, enabling the company to operate as a payment institution in the European Economic Area (EEA). Amnis Treasury Services said it will start by rolling out business activities in Germany, Australia, Italy, the Czech Republic and Poland.

Futurae Technologies closed a CHF 5 million round in April, which it said it would use to continue its European market expansion, notably in Germany, France and Austria. Similarly, Inyova launched in Germany in June after raising US$12 million.

This year, Switzerland reformed its legislation to incorporate digital assets and blockchain into its legal framework.

The act selectively adapts ten existing federal laws to improve the conditions for blockchain and DLT companies in Switzerland, introducing a license for DLT trading facilities and enabling the introduction of uncertificated securities on a blockchain-based platform, among other things.

Over the past years, Switzerland has become a hub for crypto companies and non-profit foundations. The sector now boasts nearly 1,000 companies employing over 5,000 workers. In September, Switzerland welcomed its first Swiss crypto fund when the Swiss Financial Market Supervisory Authority (FINMA) approved the Crypto Market Index Fund from Crypto Finance.

Switzerland’s commitment to sustainable finance and green fintech was formalized in November 2020 with the launch of the Green Fintech Network, a group comprising green fintech companies, trade groups, investors, academics and consultancy firms. The group is tasked with formulateing proposals to the government to improve green fintech in Switzerland.

In April, it released its action plan, outlining 16 recommendations intended to turn the country into a leader in green fintech. These proposals focus on cultivating new startups, boosting the ecosystem and innovation, easing access to capital, fostering access to data, and promoting access to clients.

Switzerland’s effort to foster the development of green fintech comes on the back of booming demand for green finance and sustainable investment. Over the past year, capital flows into sustainable investment funds in Switzerland has more than doubled, reaching CHF 775 billion in mid-2021, data from the Lucerne University of Applied Sciences and Arts show.

With 50 insurtech companies, Switzerland has emerged into the fourth biggest hub in Europe for insurance innovation with a market share of 10%. 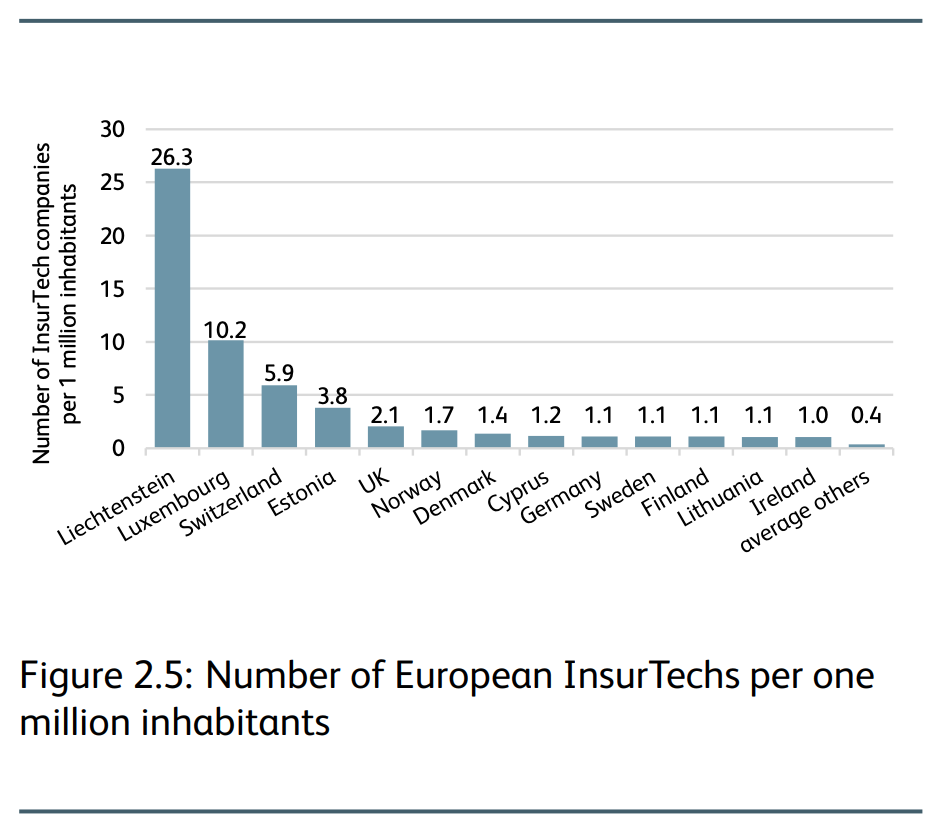 The inaugural IFZ Insurtech Report, released earlier this month by the Institute of Financial Services Zug IFZ in cooperation with the House of Insurtech Switzerland (HITS), shows that the Swiss insurtech industry is concentrated on the Marketing and Distribution category, which comprises 42% of all Swiss insurtech companies, or 21 ventures.

The second largest segment is Infrastructure (30%) with 15 companies, and the remaining 14 companies are split between the categories Claims and Customer Service (nine companies) and Product Development, Pricing and Underwriting (five companies).

Swiss companies are also more focused on international customers than the rest of European insurtech companies.