With 29 out of 50 companies, the UK takes the lion’s share in this year’s Future50, a ranking by Insurtech Insights and Sønr depicting Europe’s top 50 most promising early-stage insurtech startups.

These 50 insurtechs were selected out of thousands of early-stage independent startups founded in the past ten years and with a head office in Europe. To make the cut, they had to have raised no later than a Series A funding round at the time of judging.

The Sønr Index, which evaluates millions of data points following criteria such as the people leading the business, the potential of their product, and their growth performances, gave a pre-selection of 100 companies, which were then shortlisted and ranked by a group of industry experts.

Out of the final top 50 insurtech startups, 29 are from the UK, making the country the most represented nation in the ranking. The UK is followed by France with four, Germany, the Netherlands and Spain with three respectively, Italy with two, and Switzerland, Austria, Sweden, Denmark, Croatia and Greece with one each. 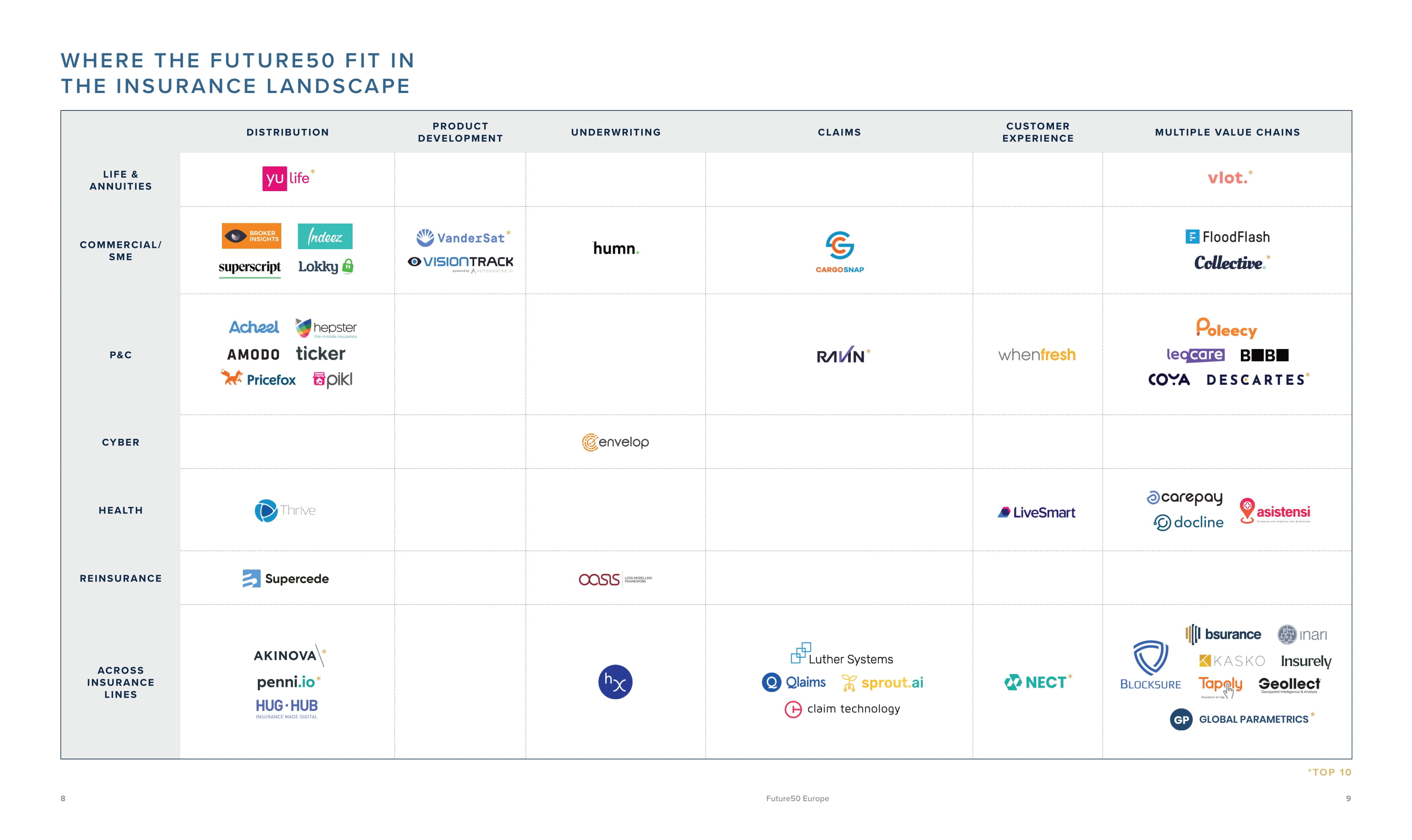 Half of the top ten insurtechs at the top of the list are from the UK: Global Parametrics (#1), a risk hazard platform that consolidates data sets that power climate risk modelling; AkinovA (#5), an independent electronic marketplace for the transfer and trading of insurance risk; YuLife (#6), the developer of an app-based group life insurance product that rewards people for looking after their wellbeing; Collective Benefits (#7), an award-winning insurance and benefits platform for independent workers; and Ravin (#10), which uses a combination of deep learning and computer vision to detect a vehicle’s condition and assess damage.

Switzerland’s Vlot, a solution that helps users recognize gaps in their personal finances and protection, took the eighth position, neck and neck with Denmark’s Penni.io, an embedded insurance solution provider.

Other top insurtech startups in Europe

In France, the other three insurtechs that made the list besides Descartes are Leocare (#11), a digital insurance product provider; Indeez (#16), which protects the income and livelihoods of independent workers through bespoken insurance solutions; and Acheel (#28), a digital insurance startup offering personalized home, pet and health insurance.

In the Netherlands, CargoSnap, a software-as-a-service (SaaS) solution that helps companies reduce cargo damage claims, was ranked 22nd, while CarePay, which offers a financing and technology platform for health insurers, was ranked 34th.

In Germany, Coya, a business-to-business-to-customer (B2B2C) digital insurer, took the 40th position, and Hepster, a developer of embedded insurance solutions, took the 44th.

In Spain, Asistensi, a platform for emergency medical insurance and immediate medical assistance, was ranked 14th; Inari, a cloud-based blockchain platform which streamlines the end-to-end lifecycle for (re)insurers, was ranked 38th ; and Docline (#47), a telemedicine solution provider, was ranked 47th.

Other notable European insurtech startups that made the include Austria’s Bsurance (#32), which develops cloud-based products to be fully embedded at the point-of-sale (POS); Sweden’s Insurely (#22), which makes insurance more transparent by leveraging data; Croatia’s Amodo (#30), a platform that enables usage-based products through increasing customer touchpoints and gamification of insurance; and Greece’s Pricefox (#50), a price comparison platform.